At the end of week 5 there is now only 4 weeks left to the official opening. Tracy Edwards, MBE, Around the world yachts women has been confirmed to open the training centre on the 20th of April, the opening coincides with the RYA Onboard festival which is aimed to promote sailing to children.

Lets hope its finished in time!

This weeks progress has again been good.

The OSB on the outside has been sheeted with a breather membrane.

The internal particians have been partially clad and the electrician has started work with first fit of the cabling for the 240 volt system. 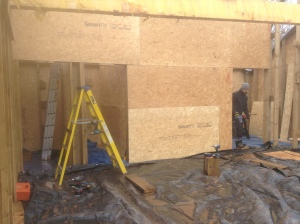 The first rafter has been measured and put in to place in preparation for the remaining to be positioned next week.